Skip to primary content
4/1/21 – This is Moonpie who is just starting treatment for heart worm. Here is his backstory:
On February 26, 2021, Jayne, from Michigan Animal Crew received a call from a person who does outreach on the east side of Detroit and the Packard Plant. While she was filling the feeding stations, Moonpie slowly walked up to her, nearly collapsing. Moonpie was placed in a crate in the woman’s car and she just laid there. She was very lethargic and had a running nose and eyes. The person doing outreach contacted Jayne in hopes of getting him placement. Jayne took him in and suspected pneumonia. Moonpie was placed immediately with a foster and provided benadryl, a humidifier, and a warm bedded kennel. The foster kept a close eye on Moonpie . She was taken to an emergency hospital and diagnosed as having pneumonia and was also found to be heart worm positive. Moonpie had xrays, blood work, and was given 5 medications to take and was sent home. Moonpie was also diagnosed with a severe ear infection and paw infection. Fortunately, her prognosis is full recovery if all treatment is timely received. 4 Paws 1 Heart is covering Moonpie’s injections which began yesterday. – diana
4paws1heart.org/donations/
“Until one has loved an animal, a part of one’s soul remains unawakened.” Anatole France 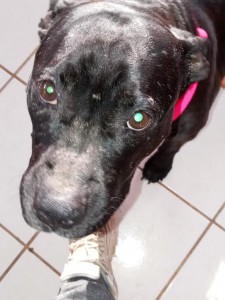 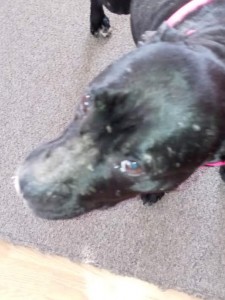