Skip to primary content
4/9/21 – Prayers for Stella. She was found at the end of March while Ashley’s friend was running on a trail. He was able to trap this very friendly stray. Ashley contacted us and advised that Stella was limping badly. We covered Stella’s medical exam where it was found that she had been shot in the leg. The doctor advised the leg would have to be amputated. She also has a tooth that needs extraction. Stella is scheduled for her amputation and tooth extraction along with her spay. Thankfully, Ashley, believes that Stella has the purrfect furever home all lined up. – diana
4paws1heart.org/donations/
“The smallest feline is a masterpiece.” Leonardo da Vinci 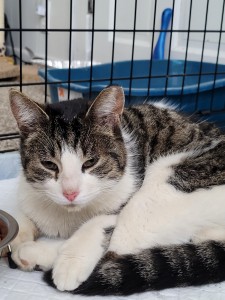