Skip to primary content
5/24/21 – So many babies are being born right now because the females just couldn’t get into vets early enough to be spayed. In many of the cases lately, the mom has been seriously ill with upper respiratory infections or worse and the illness was exacerbated by the fact they just gave birth. Victoria is one of those cases. She was rescued, pregnant, from a cat colony about a month ago. Nine days ago she gave birth to two kittens. Last Monday she was seen by one of our vets because originally it was thought she would be having 3 kittens. The rescuer wanted to make sure there were no babies left in her. After the x-rays, no babies were found and Mama Victoria seemed to be doing ok. Late yesterday afternoon I received another frantic call from the rescuer about Victoria. She needed emergency care. Although, we have several medical commitments in the future and knowing this could be another costly endeavor, we had help. Victoria was taken to an emergency hospital where it was found that she had a severe case of pneumonia and would need to be placed in an oxygen tank over night as well as be treated with antibiotics. In the mean time, the rescuer would have to syringe feed the babies. As of this morning, Victoria is doing much better and will be transferred to the care of a non-emergency vet to minimize costs. Please say a prayer for this 4-year-old mom and her babies. There are so many cases right now like this one. Your donations are always very much appreciated and without them, we could not be there for these innocent animals who have no one else but us. The doctors all agreed that Victoria would have died, leaving two orphans, if she hadn’t been treated right away. Thank you in advance. – diana
4paws1heart.org/donations/
“Your house will always be blessed with love, laughter, and friendship if you have a cat.” – Lewis Carroll 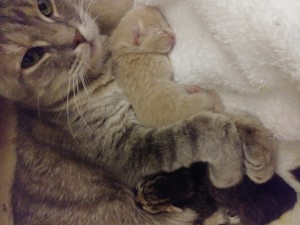 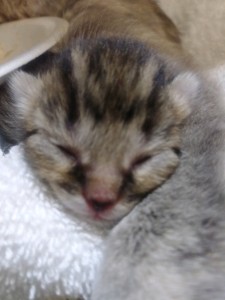 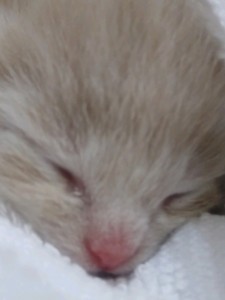