Skip to primary content
5/31/21 – As we remember those men, women, and military dogs who made the ultimate sacrifice for our freedom and we celebrate the lives they lived, I wanted to share a happy update.
Little Foot was trapped one year ago while some TNR volunteers were trapping behind a local park in St. Clair Shores, MI. The rescuers saw that Little Foot was limping. They took Little Foot to the low-cost clinic they were working with and the vet confirmed that Little Foot had a possible fracture and a gash on his leg. It was recommended he be taken to a full service vet. That is when I got the call. Little Foot was taken to one of our partner vets who determined the leg injury was severe and that something had penetrated through his joint. To repair the breaks in the area consisting of many small bones would be very difficult and would eventually become arthritic at a very early age. The gash in his leg also was very infected and needed to be treated with bandage changes and antibiotics. The doctor recommended amputation once the infections had cleared.. Because of our amazing supporters, we were able to pay for all of Little Foot’s medical needs and eventually his foster family made him a permanent member of their home. Here is an update from Jessica, the person who contacted me, and two photos taken in Little Foot’s furever home. Also, two photos of when he was first trapped. – diana
“Hi Diana,
Little Foot (now formally known as Roman) was adopted by Erin – who was the registered TNR person who assisted with the project. He has fully adapted to his new 3 legged life. He has many cat siblings who welcomed him in to their family. He has grown up to be a very handsome and surprisingly long cat! He’s very chatty now, full of energy and the biggest goofball!
Thank you for helping him get the life he has today. – Jessica”
It truly takes a village!
4paws1heart.org/donations/ 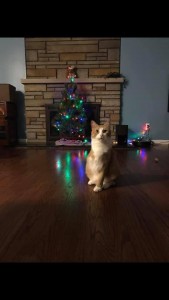 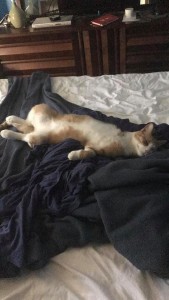 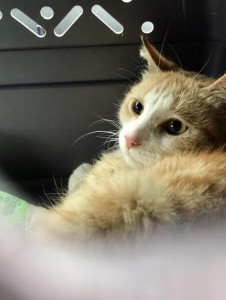 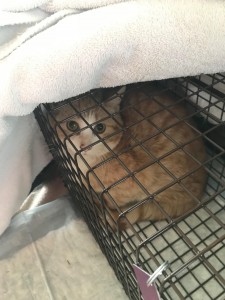