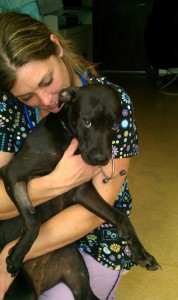 8/20/2012 – Princess is a female, mixed breed, 6-month-old puppy.  She was brought into the Animal Urgent and Critical Care Center with her rear leg broken and requiring surgery.  4 Paws 1 Heart will be paying for the surgery which will require amputation.  This puppy is so lovable I couldn’t stand it!!  She almost went home with me!  ~ Gina 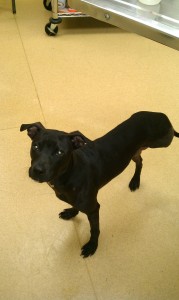 Update 9/2/2012  Princess’ leg was amputated by Dr. Venet.   She is doing great and we think that the good doctor might want to give Princess her permanent home. If not, she will  be released to Kim, Warren Animal Control Officer, who rescued her. ~ diana

Update 9/22/2012   Princess was adopted by Dr. Venet and is happy and doing great.  She has adapted very well after her surgery. ~ diana