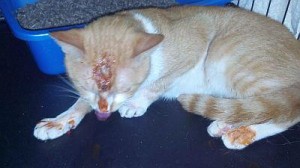 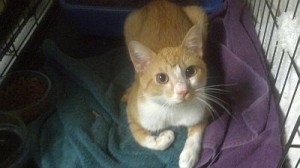 We recently shared a story about Trooper, the cat who was rescued while he was being tortured by teenagers. At the time the rescuers were able to snatch Trooper the inhumans had already cut him with a razor blade on his face and paws and h

ad a rubber band around his arm — they were trying to remove his claws. 4 Paws 1 Heart is very happy to help Michigan Cat Rescue with some medical dollars and will add them to our list of rescue friends. As so many of our rescue friends do, Colleen and Nancy of MCR risked their own lives and welfare to save this poor defenseless creature. God only knows what torture these inhumans had in store for him. I hope these teenagers meet their karma before they torture other living creatures.  Trooper continues to need everyone’s prayers in that he has contracted a virus.  He was obviously very susceptible to other issues because of his trauma and living on the streets.  We’ll keep him in our prayers. ~ diana