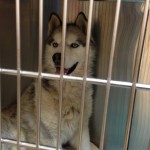 One comment on “Stray With Seizures, May You Rest In Peace”