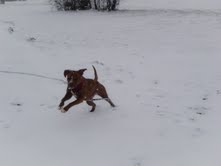 “Piper came to us (Divine Canine Rescue) from a local rescue friend (Jamie from Dog Aide) who had been tracking and trying to catch Piper for days in Rouge Park. Finally, after several days of trying and failing, she was caught. The foster for Piper fell through so Jamie put a shout out on FB for a rescue to step up and help Piper. I ran across the post, hesitant because my rescue wasn’t really ready to launch until late Spring, I offered to take Piper in.
I saw potential in Piper in her pictures on the screen and decided that Divine Canine Rescue was just going to have to start in March instead of May.

Since Piper has been with DCR we have really scrambled to get her exposure through online networking and have since taken in several dogs. But Piper will always be our FIRST Divine Canine! Thanks to 4 Paws 1 Heart stepping up to fund her vet care we were able to make this happen. We had ZERO funding. Without you (4P1H), Piper would have had nowhere to go, and DCR would have not saved the other lives that it has today. For that I thank you! And so does sassy Miss Piper! ~ Divine Canine Rescue
Thank you!!!