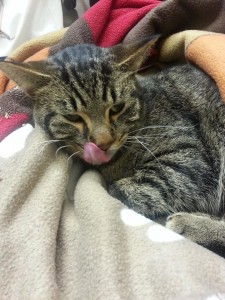 12/27/13: SOUP – Here’s a more extensive report on Soup’s condition: Soup was sedated in order to cut the can away and we noticed his tail had punctures. Upon later reviewing the Radiographs we discovered that his pelvis is broken, but it is uncertain how many areas and exactly where. He also has a dislocated femur. Now, I’ve been told different things about prognosis. This cat is literally the sweetest cat I have ever seen. He is eating, drinking, urinating, having bowl movement, etc. He can rotate from one side to the other and he rolls over on his back to have his belly rubbed. The bruising is horrendous and we suspect that he was attacked by another animal when his head was stuck and he couldn’t defend himself. We neutered him when he was sedated to remove the can (this was before we even knew about the pelvis injury) because we didn’t know about the other injuries until he was recovered and not able to walk. He was tested negative for feluk/fiv, his bloodwork full panel was normal, he was treated for roundworms, and treated for fleas. ~ Gina

Within the next day or two, Soup will be taken to OVRS to see an orthopedic specialist. Our main concern is that whatever we do, we do not want Soup to be in unnecessary pain and we want him to have a good quality of life where he can have a forever loving home. We will keep our supporters and friends updated. ~ diana