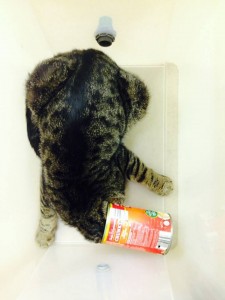 12/26/1 – SOUP: A woman called the Emergency and said she had found a cat in her yard whose head was stuck in a soup can. Fortunately, Gina was on duty and the woman was told to bring him in. Once he was brought in, the head was freed from the can, he received medication for puncture wounds, and he was neutered. After being treated for external wounds, it was determined that his pelvis was broken in three places. He was also badly bruised and It appeared that while he was defenseless, because of being stuck in the soup can, he may have been hit by a car or had been attacked by another animal. His personality is super sweet and lovable and we are determined to find him a loving, forever home.

Soup will need a home which can provide him a crate where he can maintain little movement while his pelvis heals. He will need two months of TLC but, to the right parents, it will be worth it. Let Gina know if you think you can help our little guy—he’s been through a lot. gina.4paws1heart@gmail.com..