7/17/14 – The Prince of Cuteness, Noel – On December 23, 2013 this little guy was taken to a local pet store after being found freezing cold and motionless outside a Good Samaritan’s front yard. The wonderful folks at the pet store called Tigerlily to help. They were not sure what was going on physically but he did have puncture wounds on his neck/back area, and a likely neck injury. He wasn’t able to stand, but did eat and drink some on his own. He was initially treated for shock and was stabelized until he could get a consultation with a neurologist. Over the past 7 months, Noel has continued to improve although he still has neurological issues. He has actually been able to climb his cat tree. 4 Paws 1 Heart was happy to be able to help a little with the extensive medical bills. We also thank Kim, Tigerlily President and its board, for believing in this little guy and helping him in his fight for life. Continue to follow his story on Tigerlily’s fb page. ~ diana 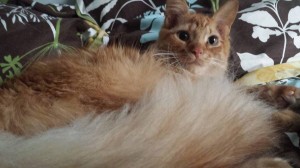