1/20/15– Courtney Update: First, Courtney is resting but not happy about her cone. Now that the emergency is behind me I want to clarify some points with the additional information I now have from the police and the video which shows Courtney being dropped off and tied behind the store. She was actually tied up behind the store on Sunday, January 18. We have heard from the kind and caring woman who found her and stayed by her side until the authorities arrived. It is believed that Courtney had 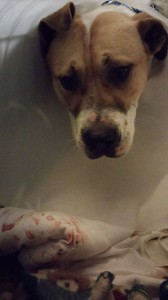 actually been tied up at another location which is where she chewed her paw off to get free and probably did NOT eat it due to hunger. It is suspected that she couldn’t feel the paw due to swelling and lack of circulation caused by the cable wrapped around her leg. The cable was serving as a tourniquet preventing her from bleeding to death. Once rescued, she required immediate surgery because of the risk of severe bleeding and the serious risk of infection. The bones were an obstruction risk in her intestines and a possible cause of infection as she passed them. Again, we thank the caring woman who contacted the authorities, the police who called in their own animal control and who contacted A Hopeful Heart, who then contacted us. And, lastly, a huge thank you to all of our friends who have donated to help us pay for her surgery and follow up care. I will continue to keep everyone informed and will, hopefully, have some photos a little later. ~ diana

1/20/15 – I failed to thank Dr. Hynes and Dr. Lutz (who performed the surgery) and the great staff of Advanced Animal Emergency, Clinton Township, MI, who immediately took in Courtney and gave her the professional and loving care she received to save her life. 4 Paws 1 Heart is truly blessed to have such wonderful veterinary hospitals willing to work with us. Here is an updated photo of our girl taken yesterday. ~ diana