1/5/15 – Sometimes all of the money in the world can’t save an animal. We want to thank Nancy of Michigan Cat Rescue for saving Seymour from any more abuse and giving him the opportunity to know what it was like to be loved — even for a short while. 4 Paws 1 Heart is thankful that we can help our friends at Michigan Cat Rescue.
RIP sweet Seymour. ~ diana 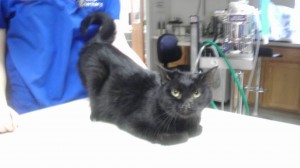 “We would like to share the sad story of sweet Seymour. On Christmas Day our president was on her way to the airport and just happen to stop at a gas station she has never been to before. She started pumping gas when she noticed a black cat skin and bones come out from behind the building. This sweet cat went up to a man purring and rubbing on his leg as if to ask for help. But instead of helping this poor starving SWEET cat the man started to brutally kick the cat repeatedly shouting. Of course with no care for her own safety our president immediately intervened. When she confronted the man he got angery at her, shouting, swearing, coming towards her. Putting herself in dangers way she scooped up the cat that was later named Seymour and was able to get out of the situation safely. Seymour snuggled and purred into her lap, head butted, and licked her chin, he knew he had been rescued from not only starvation but the dangers of the outside including evil humans. Although extremely sweet Seymour was a very sick kitty. Not only injured from impact of abuse, weak from starvation, a severe upper respiratory infection, but radiographs revealed a mass in his abdomen, his skin was yellow or jaundice which means liver problems, and he had fluid in his abdomen in which the vets suspected FIP. Seymour was super sweet and loving the entire time the veterinary staff worked in him, just wanting to cuddle in their arms. Everyone that met Seymour fell in love with him. Despite all tireless efforts to save this sweet boy, we are deeply saddened to say he didn’t make it. Our sweet little Angel kitty is suffering no longer and was surrounded with love and warmth in his last hours. I write this with tears in my eyes and my heart goes out to all kitties out in the cold, starving, and enduring abuse. We are all extremely heartbroken this little guy touched all of our hearts. Even after being abused he still was so loving and trusted humans. Nancy”