5/14/15 PART II – In mid afternoon, I received another emergency call. A construction worker on Harsens Island, MI found a cat whose paw was caught in one of those inhumane traps. (see photo). The construction worker immediately left the island with the cat to meet our friend, rescuer, Debbie N. Not knowing what condition this poor animal was in and afraid he would be going into shock, we made arrangements for Harsen (my name for him) to be taken to a vet. -We are very fortunate to have veterinarians who will work with us on a moments notice.- Harsen was given morphine and the doctor advised that Harsen’s leg would have to be amputated. In that Harsen was at that point medicated and stabilized, Debbie N. waited until the Animal Urgent and Critical Care Center opened and Gina and the doctor on duty could take over. Our poor little Harsen was in very poor condition, and, then Gina called me with even worse news — Harsen tested positive for feline leukemia! And even considering that, his white blood cell count was very, very low. His already compromised condition would be further compromised and the risk for infections, even if he made it through the amputation surgery, was very high. You can imagine how we were all feeling — Gina, Dr, Graves, Debbie N. and I. The poor little guy had probably spent the last couple of days dragging that trap around, in severe pain. Should we put this poor guy (maybe 5 to 8 years old), who had already been through so much, through the risk of surgery and weeks of hospitalization for what would be potentially a short life ending very painfully because of the leukemia OR should we give him comfort and let him cross the Rainbow Bridge. We eventually decided it would be best for Harsen to let him join the many beloved animals who have gone before him. We know that he is now without pain running on all four legs without pain or fear of what humans can do. —- On a side note, the construction worker (what a caring person!!) reported the situation to a DNR representative and was told that these traps were used by individuals to trap coyotes. The traps are supposed to be tagged and removed by a certain date. I don’t know much else about the who, what, or where. That’s all I know is that this is the third time I have been involved in this type of situation and I still can’t understand why any human would use this kind of torture equipment for ANY animal. These should be illegal to use and once again, it is all about laws and demanding more from your legislators as it pertains to animal welfare and animal rights. RIP our little Harsen~ diana 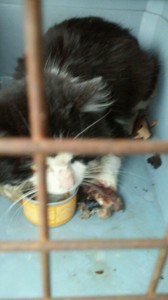 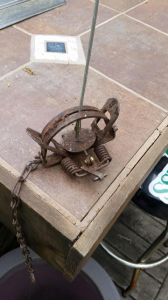