6/28/15 – A bit of sunshine on the gloomy Sunday morning in S.E. MI. Many of our friends will remember Molly and McGee (now Mango) . They spent weeks on death row in a high-kill shelter. Molly was pregnant, sick, and emaciated; McGee was emaciated. Word was that they were not being fed well. A Chief from a nearby County shelter was able to get them released and they found their way into the home of Patricia B. and under the medical care of 4 Paws 1 Heart. McGee didn’t take too much. Once he gained a little weight he was able to be vaccinated and neutered but poor Molly was another story. She gave birth to 5 dead babies and was taken to the hospital to make sure there were no other complications. Molly struggled through her recovery and even though separated by a crate, McGee would spend hours laying on Molly’s crate. Molly had to see the doctor a couple more times but she finally was healthy enough to be spayed. 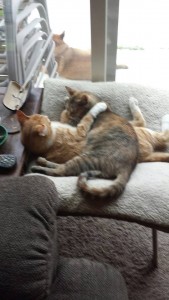 It was then that she tested positive for leukemia. We didn’t know what to do. Then a kind woman, Sue, stepped in and adopted both Molly and McGee. Sue took Molly and McGee to her vet and another test was performed on Molly. Molly tested NEGATIVE for leukemia. The doctor said that tests are not always reliable. And now, just a few months away from that awful time on death row, Molly and McGee(aka Mango) are loved, healthy, and safe. Yes, it does take a village and included in that village are 4 Paws 1 Heart supporters who take the time to participate in our fundraisers and donate their hard-earned money so that we can make a difference in the lives of the abandoned and abused. ~ diana