6/4/15 – This little guy who we temporarily named “Thunder”, was found as a stray last week. He was hit by a car and suffering lung contusions and trauma to his front leg. A good Samaritan brought him to us for help. We provided funding for medical care to help stabilize him. The good Samaritan found the owner the next day. According to her Thunder gets out of the yard often. We tried to educate her and encourage microchipping him or putting some form of id on him. The owner was to follow up with medical care at their veterinarian. I will touch base to make sure that happened, but we really need owners to be more responsible over the well being of their animals. That pup could have died.. A dog doesn’t have much of a chance up against a moving vehicle. ~ Gina 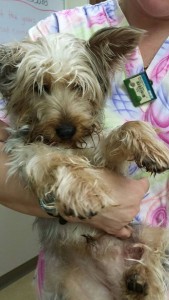