The past six months have brought through our doors, hundreds of kittens needing basic help, serious treatments for upper respiratory infections, injuries, and a variety of other issues (like little Allie with the Hernia). This is not to mention the many cats like Chance, Magic (who will be fitted with a brace due to a broken leg which was never treated), Bridgette, and Molly (just to name a few). Then we have the many dogs, such as Katniss, Ginger, Odin, Princess Buttons, King, Blizzard, Joy, and Courtney who came to us with parvo virus, heart worm, strange objects in their stomachs, and other major injuries. And, unfortunately, I don’t see things getting any better.

The 4 Paws 1 Heart Board, Gina, and I are so very thankful that we have been able to continue to help these sweet abandoned animals but we couldn’t do it without our generous friends who donate money and attend our fundraisers, as well as the many community businesses who support us. But at this time we may have to dial back a little until donations pick up and we have a few successful fundraisers behind us.

Nonetheless, in light of the over 2,500 animals we have helped in almost five years of existence, I thought it only appropriate that I post our sweet boy Hercules because it was through his torture, that 4 Paws 1 Heart rose to a whole new level of helping the abandoned and abused. We continue to love our famous mascot and will always be thankful to his mom (Dr. Kern) and his dad, Chris for keeping him in our lives. ~ diana 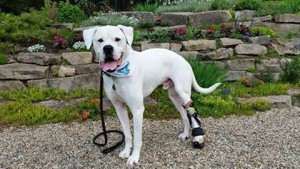