11/20/15 – Meet Leonidas. A 4p1h friend rescued Leonidas from a difficult situation. Here is his story:

“He was bought at 5 weeks old by a man who wanted to surprise his pregnant (with twins) fiance, from a filthy situation where it appeared puppies were being breed for money. Two weeks later, the fiance realized she could not properly care for him. Missy G. rescued him before he found his way into the wrong hands.

Unfortunately, he has horrible diarrhea and is extremely skinny and only weighs 1.6 to 2 pounds. He is said to be old English bull dog pit mix (maybe American bull dog pit mix via looking up both breeds). 4 Paws 1 Heart will pay for his medical treatment and, hopefully, he will be available in about one month to six weeks for adoption. – Missy”

Please contact Missy at mharlow614@gmail.com if you have questions or are interested in a future adoption. ~ diana 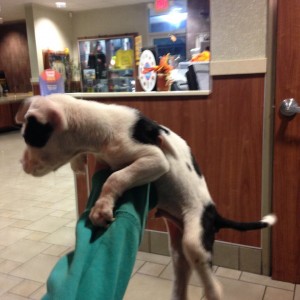 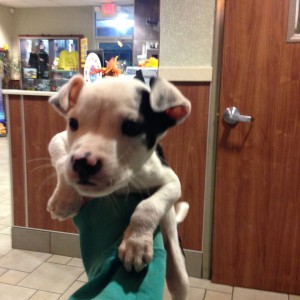