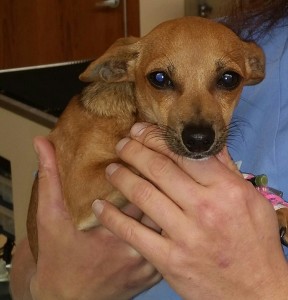 Mocha Update..
I’m putting out a request for prayers and donations because it’s cases like this one, that would not have been given a 2nd chance… Late last night Mocha went into surgery to see if he had an obstruction. There was no foreign object seen, but there was a significant motility issue with his intestines. He is on the proper meds for that issue but we need him to eat and keep it down. He is only 6 pounds and 6 months old. Over the weekend he became critical and the family that surrendered him was looking for a shelter to “drop him off”. There are no shelters open on the weekend and he was suffering. We offered to take him into our organization and cover his medical care, which has been extensive, but if we didn’t I’m almost certain he wouldn’t be here today. I’m asking for any support our friends can offer by donating dollars.. This year we broke the record with the amount of lives we’ve given a 2nd chance too and the requests keep on coming. As of today, we have paid a little over $109,000 in medical bills and that doesn’t include Romeo and Mocha. I would love to be able to continue our mission, but we need your help. I want to thank everyone for any and all support you have given us, and as always I want to thank the veterinarian’s that work so hard to help save these animals. Gina