6/28/16 – Prayers needed for this abused dog, Axle. It was Sunday when the Roseville, MI police department received an anonymous call about a dog “dying in the street”. The animal control officer was called in and he trailed the dog to a mobile home park where he found this horrible sight. A dog so horribly emaciated it was surprising that he was still alive. It appeared the kids in the park had been feeding him whatever they could find. The animal control officer immediately brought Axle to an emergency hospital where he was kept overnight and then transferred to the veterinary hospital who contracts with the City. Late Monday, 4 Paw 1 Heart received a call asking if we could pay for Axle’s surgery — he had an intestinal blockage and was, in fact, dying. We agreed to pay for the surgery and Axle was taken to another facility because the one he was taken to could not accommodate the surgery. Today he had surgery and he is not doing well. A sock was found in his stomach and it appears it had been there for days. A detective has been assigned to this case and we will keep everyone updated. This case reminds me so much of our Katniss Everdeen it breaks my heart that people can be so disgustingly cruel. ~ diana

6/28/16 – Axle Update: Axle is on a 24-hour watch. He is resting and being pumped with antibiotics. More than the one sock was found in his stomach. Axle has a torn intestinal wall and the doctor believes that this blocked condition was going on for more than a week. With his severe emaciation, along with this surgery, Axle’s recovery is still guarded. Please continue your prayers. We all know how much they’ve helped so many of the animals we have taken on. We have received many offers to give Axle a home but at this time, Axle is the property of the City of Roseville and a cruelty case might be pursued. 4 Paws 1 Heart at this time is working closely with the City for Axle’s medical help. ~ diana 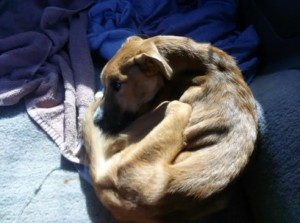