8/12/16 – We are less than a week away from our anniversary when we will be entering our 7th year of making miracles happen for the abandoned and abused. Although you’ve seen the myriad of cats and kittens we’ve been helping this year, if you know 4 Paws 1 Heart, you know we don’t discriminate. It just seems that the population of unwanted and sick cats and kittens have been greater than that for dogs. But, having said that, I would like you to meet Cocoa and ask you to say a little prayer that the rest of her life will be much better.

Cocoa had been abused by her original owners. They kept her locked in a closet and the man only brought her out for beatings. She is now obviously terrified of men. The person who had her afterward recently became homeless and left Cocoa with her grandfather; he wants the dog gone NOW. Consequently, there was a danger that Cocoa would be returned to the the original owner who used to beat her.

A very caring couple who have rescued several dogs and who we’ve helped with medical bills, including heart worm, contacted us for help. They will be taking over responsibility for Cocoa and have actually found a safe and loving home for her out of State once we have had her spayed, vaccinated, and tested. All of this will be done, and God willing, Cocoa will be on her way to a life of love. 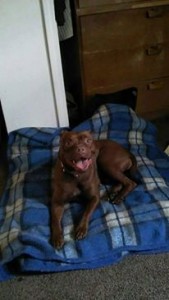