“Gracie’s owner was a neighbor of a friend. The neighbor breeds animals and Gracie was about to have her puppies when I met her and she had her puppies on Thanksgiving day. So that’s about how long I’ve known her. She was kept in the back room of the house or on the chain outside. She was fed but that was the extent to her time with people basically. She was around a smaller dog pretty much all her life so she’s very good with all dogs. She is very submissive with a sweet personality. She gets along with cats as well. She’s just an honest to God sweheart. Even while driving she was just gazing into my eyes trying to lick me and inch over as close as she could to my lap. She doesn’t want to stop being touched and paid attention to. She’s just the sweetest girl. Fortunately, the owner was finished with using Gracie so he surrendered her to me. I took Gracie to the vet and found someone who would take her in and care for her until a permanent home could be found, but, unfortunately, it was discovered that Gracie is heart worm positive.”

Although donations have been slow as I earlier reported and the demand has, obviously, been very high, we know that we have a couple of fundraisers coming up and we couldn’t turn Gracie away. This very sweet girl deserves a better life and 4 Paws 1 Heart would like to play a role in that. So, we will be paying for Gracie’s treatment with prayers that she will one day be healthy and loved and no longer used. ~ diana 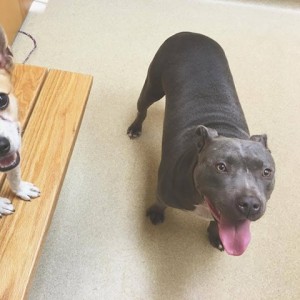