10/11/16 – RIP Sweet Mama: This poor female had, what we think, is a litter of 2 kittens two months ago. Unfortunately, she had a prolapsed uterus resulting from the birth and has been like that since. We were contacted by a caring person who was trying to catch her so that we could get her into a veterinary. With the help of our friend, Rachel G., she was trapped today and brought to one of our trusted doctors at Patterson Veterinary. It was bad news for Mama though. It was feared that she already had infections from the length of time she had been wandering the streets with the prolapsed uterus and her prognosis was very poor and even if she made it through surgery and anything else that cropped up, there was no guarantee that she could be adoptable. It was determined that the best course of action for her was humane euthanasia. Our heart breaks for all of the innocents out on the streets who so very often become sick or die because they continue to have babies. Our heart also breaks for the kind people like her rescuers who are relentless and do everything they can to save a life. The good news through all of this is that, thus far, two 8-week old kittens have been trapped and taken to the vet while the rescuers were trying to trap Mama. Please share the importance of not turning your back on those who need us. Mama was one of the special cases I’ve referred to in the past where no matter how little money we have, we will never let an animal suffer because of a lack of funds. We will always figure out something! 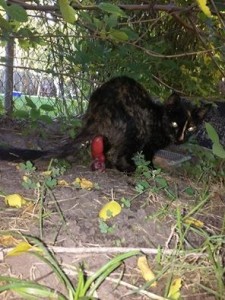