12/25/16 – For those of our friends who celebrate the birth of Christ, we wish you a Blessed Christmas. On this morning I would like to share two happy beginnings. The first is Sonic (now known as Dino). It was in October, 2014 that Sonic was brought into the emergency after being attacked by a dog. Due to his many injuries, Sonic spent several weeks in the hospital, being fed through a tube, almost losing an eye, and later, experiencing, more surgery for his torn mouth. There were times we thought he wouldn’t make it but with Gina’s love and care and the professional staff at the emergency, Little Sonic came through and was adopted by a family who has been close to me for over 50 years. Here he was when he was first brought into the emergency and today, wishing everyone a Merry Christmas. Because of our supporters, we can make miracles like this happen. ~ diana 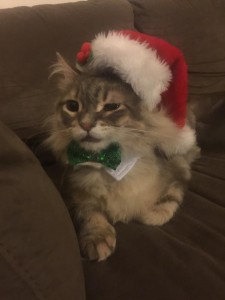 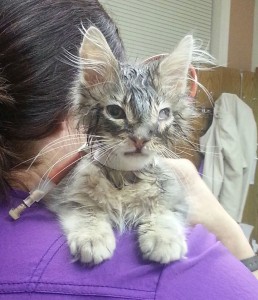