12/17/16 – It was June, 2015 when Zelda was brought into the emergency by a concerned citizen who found her laying in the middle of the street, pregnant, after being hit by a car. She had trauma to her head and some obvious scrapes; her babies did not survive. Thankfully, a loving, forever home was found and here is the happy update from her mom. ~ diana

“This is the story of meeting my new best friend, at a time when I needed it the most. My last pet, a beloved Maine coon cat named Maddie, was nearing the end of her life. I was so distraught and, frankly, in deep denial that the end was near. I remember visiting her while she was at Harper Woods Veterinary Hospital, overwhelmed with a broken heart as she was so frail and short in breath. I drove her to several animal hospitals, desperate for help, to no avail. This precious little kitten that I had adopted on Cinco de Mayo (which I forever will call Cinco de Maddie-o) passed away in June 2015. I was crushed and never thought I could bond with a pet that deeply again. My dear friend, Gina DeLuca, was supportive and caring to me during Maddie’s illness and passing. Only a couple of weeks later, she mentioned to me a beautiful young cat that 4 Paws 1 Heart was saving. This little angel had nowhere to go and was yet to be adopted into a loving home. But anyone who knows Gina knows that she will never give up on a pet, and will make sure that animals like this receive special homes.

This gorgeous cat, Zelda, had been hit by a car and was taken into the vet to be assisted by Gina. I have no idea how Zelda could survive outside in the harsh conditions, especially given the busy roads nearby, cold weather, and the fact that she was pregnant as a stray (the kittens did not survive the car accident).

Yet, because of Gina and 4 Paws 1 Heart, Zelda’s medical expenses were covered. Zelda was spoon fed and provided with love and constant care. Gina made sure she had somewhere to stay while she searched for her forever home. Many people do not realize the hours of effort and diligence this takes, but I could tell simply by listening to Gina share the story with me. When others give up, 4 Paws 1 Heart never does and goes the extra mile to find innocent animals the homes they deserve.

I will never forget the day, July 3, 2015, when Gina asked me if Zelda could stay with me. I took one look at Zelda’s picture and, in my heart, I knew it was meant to be. Like Maddie, Zelda had a rough beginning in life and only because of wonderful animal lovers did she have a great life. I thought of the time Zelda and Maddie were both at the vet at the same time. I’ll always believe that Zelda said hi to Maddie and Maddie told her “that’s my cat mom…you should live with her–she’s so nice!” It comforted me knowing that Maddie would want me to rescue another sweet girl, like herself. I called Gina and said “I’ll take her!” and she said I could pick up Zelda that night.

In a whirlwind, from sobbing nonstop at the loss of Maddie, to bringing Zelda home that evening, I have been continuously grateful to 4 Paws. I, too, grew up being bounced home to home, dependent on the kindness and generosity of others. Knowing that animals face the same struggle is heartbreaking. But because of 4 Paws 1 Heart, the best organization I have ever known, Zelda is not a statistic! She lives the dream life. She spends her days looking out windows, laying on blankets and beds, eating snacks, and playing with toys. She loves toy mice, and I bought her 100 to spread all around the house. She’s a fan of Christmas trees and playing with water, just like Maddie. I know Maddie is looking down and is very happy that her favorite perch and stuffed animals are being enjoyed by another sweet girl.

I will never be able to thank 4 Paws and my dear friend Gina for giving me this treasure. Zelda is my new best friend and she will live a healthy life with all necessities, love, and medical care, because of the commitment of 4 Paws and the special people who donate to this tremendous organization. Thank you for Zelda!” 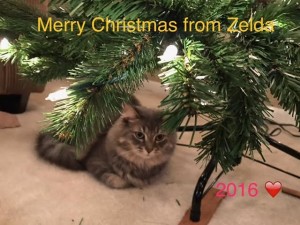 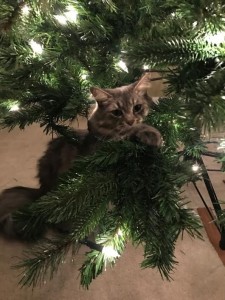 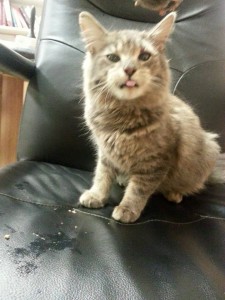 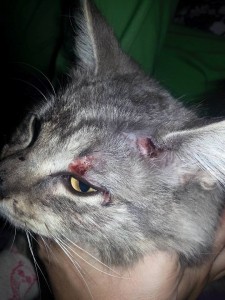