1/15/17 – Once again, our hearts were broken this weekend by the loss of this very sweet, semi-feral kitty, George. I received a call for help from the caretaker of a cat colony in Macomb County. She had been caring for George for over a year and Saturday he showed up dragging his body and hardly able to move. It was assumed that George had been hit by a car and he crawled his way back to the colony. What do you do???? Do you only agree to pay for humane euthanasia (which is obviously the less expensive option) or do you try to give this innocent animal a chance. If he had a broken pelvis, with proper care, he can live a good life — look at our boy, Soup. If it’s a broken leg, the worst scenario, is a leg amputation and the caretaker committed to keeping George inside. Were there other issues happening internally that couldn’t be seen from outside??? Very often it’s a crapshoot. Do you spend what you know might be a considerable amount of money to try and save an animal knowing you might lose in the end? When I saw this sweet face, I had to give him a chance. George was taken to the veterinarian where several x-rays and tests were taken — unfortunately, not inexpensive services. And, after all was said and done, it was determined that George’s injuries were just too extensive to ensure surviving or even a good quality of life. He was humanely euthanized in the arms of his caretaker, Dawn. RIP sweet George. You will never be cold again, never have to worry about people hurting you, and you will never be hungry. ~ diana 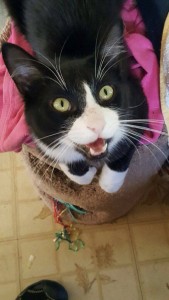