12/30/16 – As we approach 2017, I would like to continue with our happy updates. This was our original posting when Romeo was rescued:

“10/19/15 – Roseville, MI – We don’t know much about her or him. What we do know is that I received an e-mail from a caring apartment manager. She told me that there was a cat left in an apartment when the 70+ owner died. It turns out that this woman was dead for 10 days in her home with this baby before anyone discovered her. And, even then, no one saved the cat. The apartment manager had no idea until a work crew was in the apartment making repairs and when they opened a cabinet the cat flew out — this was 10 days after the woman’s body was found!! When the manager contacted us she said that a cat was stuck in a hole under a sink and although she put out food and water, the cat wasn’t eating. Again, what do you do???? We are not a rescue!! But could anyone leave this poor cat in the condition it was in? I contacted Chance’s mom, Denise, and our best trapper in the world, Debra Berolotti. They contacted the manager and checked out the situation. It appeared the poor cat was stuck. With some tools borrowed from the maintenance people and our other ‘village’ friend, Kurt, the hole was made bigger and Debra was able to get her/him out of the hole. He/She is very frightened and thin; the paw appears to be injured”.

At the emergency it was determined that Romeo is was at least 5 years old, front declawed and neutered. He had a very sore back and sore front paw, we think, from struggling to get out of that little hole. His liver enzymes were elevated likely from lack of food and he received a pain shot & fluids. He was very thin and very traumatized.

The GREAT NEWS: Romeo found a temporary home with our wonderful friend, Denise Najera, Chance, and the Crew. Denise found the best home for Romeo and here he is today. Don’t you just love happy Beginnings???? ~ diana 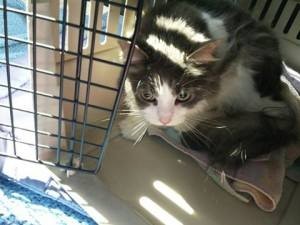 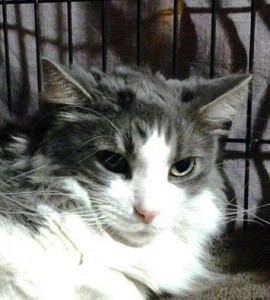 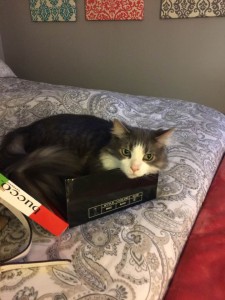