12/29/16 – Meet Moose. We were happy to help him through his emergency and we are very thankful to our friend, Megan, of Friends of Scooby Rescue for saving this handsome boy. ~ diana

” Moose was on his way to animal control so I stepped in and found him a foster. He was skinny and not feeling so great. We started to fatten him up and then he had a mild seizure. After speaking with the vet we were told he could not be treated for a seizure unless it was documented or witnessed by staff. A week later another seizure surfaced but was only witnessed by a child.
Fast forward 2 weeks. 2 more undocumented seizures.
Wednesday night we were finally able to record a seizure but the vet was already closed. With the help of 4 Paws 1 Heart, Moose was seen at ORVS and treated for his seizure. They did blood work and an exam. And he was given Phenobarbital for the seizures. We follow up in a few weeks. I’ll send an update after he is seen.
We are very thankful for Diana and 4 Paws 1 Heart. -Megan” 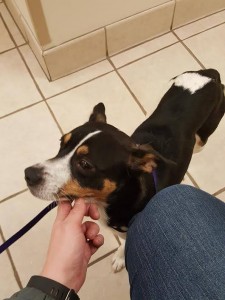 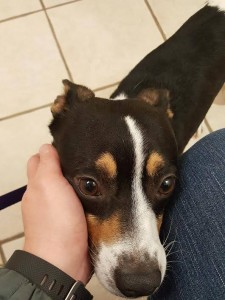