1/23/17 – This past week I was called about a dog who had been thrown out of a car. The person witnessing the incident contacted the police and A Better Place Animal Rescue. it was determined that the dog had a microchip and when following up with the most recent owner, it was learned that Susannah was the ‘victim’ of a divorce where the wife “got the dog and the house” according to the ex-husband. When the wife was contacted by the police, she said she “was done with the dog”. Of course we were there for Susannah. She was seen by the vet and, thankfully, found to be heart worm negative. She has received her vaccines but will need some dental surgery which is causing her pain. Now that her ‘hold’ is up, 4 Paws 1 Heart will be taking care of her remaining surgery. We wish her much love; she is safe with a foster and will be looking for her forever home. ~ diana 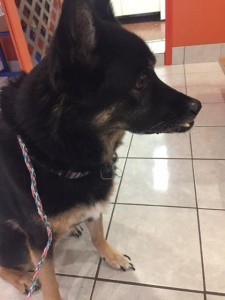