2/6/17 – RIP Baby. Last Wednesday I received a call about this very sweet, emaciated dog who was found wandering in the woods. We immediately authorized a visit to the doctor where it was found that he was heart worm positive. He was so emaciated it was difficult to withdraw blood for further tests. Yesterday, I received the call that Baby was not eating and he had been vomiting and had diarrhea. My concern was Parvo. With the help of another rescue, we were referred to Dix Animal Hospital who was very willing to work with us and arranged for Baby to be seen asap. Upon examination and testing, the doctors suspected that Baby had contracted leptospirosis. This poor sweetheart had so many issues, it was recommended and we (the rescuers and I) agreed that Baby should not be put through any more suffering. He was humanely euthanized and now will no longer suffer or have to search for food and love. Upon finding Baby, the rescuers, deep in their hearts, felt that Baby would not survive but they wanted to make sure that he would not die alone and suffering in the woods. God Bless all of those wonderful people who don’t turn their backs and thank God for all of our donors who make our mission possible. ~ diana 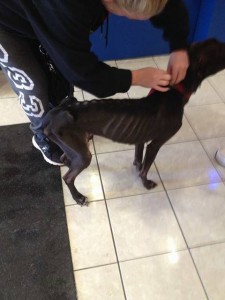