2/15/17 – This little sweetie was taken in by Angels for Animals. They were told she was a kitten but it turned out she was just very small from being neglected for too long. She had a severe upper respiratory infection, swollen legs and part of her tail was dead. She spent a few days at the vet but then the rest of her tail was obviously ‘dying’ and needed to be amputated. She was operated on February 13 and her prognosis is great. 4 Paws 1 Heart was thankful that we were called on to help beautiful Millie. ~ diana 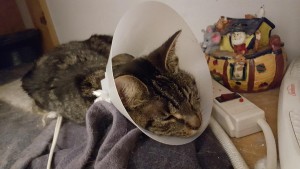