2/16/17 – Meet Diesel. Yesterday he had much needed surgery for an eye condition called Entropion. Entropion is a genetic condition in which a portion of the eyelid is inverted causing eyelashes to irritate the eye. This condition is not only painful but can result in blindness. Here is Diesel’s very sad story with a happy beginning. ~ diana

“Hello Diana
My name is Tami I have had the honor to foster Diesel for the last couple weeks. Diesel was brought to our attention when a woman’s mother was begging for someone to do a welfare check on a neighbor’s dog. She said he was left outside all the time and was chained to a porch and hardly fed and his eyes were so infected he could hardly open them. I live close by so I contacted the rescue I work with and said I would go get him to get him out of the cold.
When I got to the house he was inside and the man was very relieved to know he was being taken. They were being evicted and were unable to take him with them.
Diesel was all too willing to jump in the car with me and was sweet as could be. Diesel made it in the house and was sooo scared before even meeting my dogs that he nervously urinated all over himself. After getting in and getting comfortable he met all of my dogs 1 by one and they let him in no problem. He feels the need to be on you at all times. He was supposedly destructive due to separation anxiety. I personally have not seen that aside from stuffed animals if he can get them he will. He loves kids he is not aggressive just playful. He is learning that little children are not toys to play with. I had to have my sister keep him one day when I first brought him home and she has several cats and 1 dog. She had no issues with him and the cats aside from being very curious but no aggression what 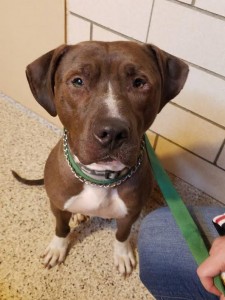 so ever. Every day that goes by he becomes more and more comfortable being on his own. He now will even sleep on the couch instead of on me in my bed.
His eyes were never actually infected although to someone who does not know about his eye condition that is what it would appear to be. He was thin with poor skin condition but that is correcting itself with proper nutrition and care. He is an amazingly gentle dog for the lack of attention he seemed to have received previously. He is so gentle and patient for having been so neglected. He was heart worm negative and came already neutered.
Thank you so very much for your offer to pay for his surgery I can only imagine how wonderful it will be for him to be pain free for the first time in his life very soon. Thank you again from all of us and mostly from Diesel – Tami”