6/14/17 – One of the independent rescuers we work with referred this situation to us. A female cat just had kittens; two were dead, one appeared to be healthy. By the next day the healthy kitten was dead. The mama was lethargic and seemed to be in distress and there was a concern that other stillborn kittens might be in the birth canal. We had the female taken to our great doctors at Advanced Animal Emergency and it was determined that Dakota was suffering from retained placenta. She was given antibiotics and is now safe and resting in a home. ~ diana 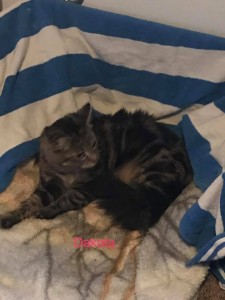