6/23/17 – Meet Daisy. She was found tied to a tree with no food or water. Two very kind men working in the area, untied her, bought her food, and brought her in. It appeared she had a broken leg so we were called. Daisy was seen by one of the vets we work with and it was determined that Daisy did, in fact, had breaks that had healed over. It was recommended that Daisy’s leg be amputated. The doctor wanted to wait until Daisy, who was also emaciated, was healthier. So, we decided to take the opportunity to have Dr. Kern assess Daisy’s break before the leg is amputated just in case a prosthesis or therapy would be in order. One of the rescuers will be keeping Daisy for his own and we are very thankful that they contacted us. I will keep everyone updated. ~ diana 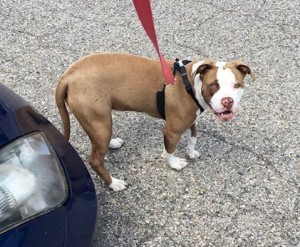