8/5/17 – And this is why so many in Animal Advocacy ‘strongly dislike’ people and the laws associated with animals! This 15-16 year old cat showed up at a 4p1h friend’s house — “she was covered in feces, was severely dehydrated, covered in fleas, only had a couple of teeth left, was starving, appeared to be hard of hearing, and had mats all over her that had to be cut off.” This poor animal had severe diarrhea and when we were contacted about her, we immediately authorized her to be seen at the emergency hospital. She was treated there and later seen by another vet to get a handle on the severe diarrhea. The very sweet, neglected cat was found to have a large mass and it is suspected that not only has she been suffering from IBS, but she may have a cancerous tumor. After the medical examination was completed, she was scanned for a microchip and it was discovered that this cat was in fact OWNED. The owner was contacted and she advised the veterinary technician that the cat had been thrown out because she was (my words) defecating all over the house; the person said that she “didn’t know if her husband wanted the cat”. The rescuer was willing to let this poor girl live out her potentially short life in her home. Over 24 hours later, the veterinary was contacted by the owners who said they wanted their cat back. All of us were wary because of what was originally said BUT there was nothing we could do. The owners called the police and accused the rescuer of stealing their cat. To make a long story short, the cat was returned to them and 4 Paws 1 Heart received no reimbursement for the medical expenses paid at an emergency hospital and a specialist veterinary. But more importantly, we felt the cat would just be thrown out again. In addition to all of this, as I was researching the medical expenses we paid, I found that this cat had actually been rescued by the same person in 2016 where we again were asked to pay for a vet visit because of severe diarrhea. At that time, the vet again found the microchip and contacted the owners and the cat was returned to them. Mysteriously the cat showed up once again, 9 months later, roaming the streets, very sick. Here she is the first time she was rescued and the second time she was rescued. Remember that according to current laws, animals are ‘property’ just as your TV and couch. Let your legislators know if you care. ~ diana 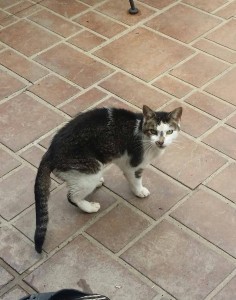 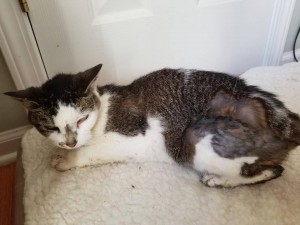