7/28/17 – Snowball and his brother were rescued during a TNR effort. At only two months old, Snowball had a half-dollar size gash under his chin which was infected and, according to the rescuer, the trachea was visible. We were contacted and approved having Snowball seen by a doctor. After being examined, it was determined that there was infection and it was critical that surgery be done to clean and close the wound otherwise Snowball would die from a progressive infection. But, the doctor stressed that if surgery was done within hours, Snowball would be a healthy, loving kitten. We agreed to the surgery which was done yesterday. The rescuer brought Snowball’s brother to the hospital to keep him Company. The surgery was successful and here you can see Snowball with his brother while recovering. (I did not post the most graphic of the photos of the wound but one can get a sense of the severity by the photos posted). ~ diana 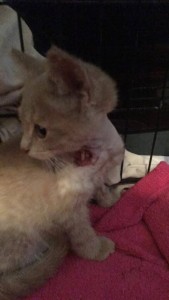 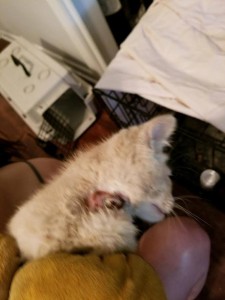 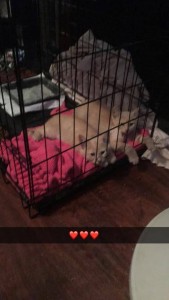