9/28/17 – Jordan is the miracle kitty. We were called by our good friend, Patricia Brown, about a kitten she had found on the street and was in dire need of medical assistance. He was about two months old, had a very serious upper respiratory infection, and was very dehydrated and emaciated. I authorized Jordan to be taken to the emergency. In the middle of the night I received a call from the doctor who was recommending that Jordan be humanely euthanized due to the severity of his infection and dehydration. The doctor said it would take several days of hospital care and as all of you know, this has been a very tough summer with many serious cases. I spoke with Patricia who said that she would take in the kitten and care for him. And that is what we did. That was July 27. Over the past 2 months, Jordan has had to see the doctor for a severe ear infection which resulted in his loss of hearing but through it all he has been a fighter and just kept getting stronger. Today, he is doing great and has been neutered and is up to date with his vaccines. He hasn’t let his deafness get in the way of having fun. Thank You Patricia for making this miracle happen. ~ diana 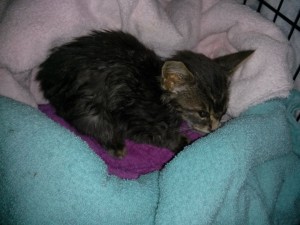