9/28/17 – RIP Sweet Aime. I was contacted by a friend of 4 Paws 1 Heart who is a postal carrier who never passes by an animal in need. Her friend had found a kitten near a shopping center. The kitten’s eyes were in terrible shape. Fortunately, the great staff at Center Line Veterinary was able to get Aime in very quickly and the doctor called me to report that maggots had taken over the inside of Aime’s eyes. He was very emaciated and needed fluids. After he was treated at the hospital, Aimee was sent home with his rescuer to continue the fluids with an appointment for the next day. Aime seemed to be doing well but by the time he arrived at the veterinary the next day, his temperature had gone down to 93 degrees and his glucose had gone down to 88. He was in dire straits and the worry was that the impact of the maggots was just too much for this little kitten to get through. The hospital continued to try and save Aime but in the afternoon I received that call where the doctor recommended humane euthanasia. Although we make the decisions on what medical we will pay, I prefer the rescuers to be a part of this very difficult decision. The doctor spoke with the rescuers who immediately went to the hospital to give Aime one last bit of love before she was let go to cross the Rainbow Bridge. May God Bless all of the rescuers and protect their hearts. ~ diana 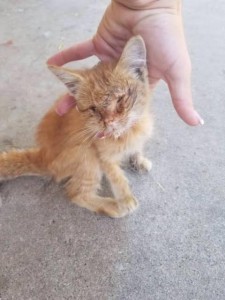