9/4/17 – On this Labor Day I would like to share this very heartwarming story. Again it was all about teamwork — a Macomb County animal control officer, Brian Pylar, who cared enough to start a GoFundMe page, took the kitty into his own home to foster and adopt out, and who contacted us for additional help. Mac, a three-month old, kitten was found on the street, injured and very ill. It appeared he had been attacked by a larger animal; he had a broken, shattered arm which needed to be amputated. He also had an abscess which damaged nerves and caused an infection. His arm needed to be amputated. NOW THE GREAT NEWS – On August 31, I received a text from Brian. Mac, our little guy with the amputated arm, was adopted by a war veteran who lost an arm while serving our Country. Mac would have been euthanized had it not been for a caring person and 4 Paws 1 Heart. Now two lives have been changed forever! ~ diana 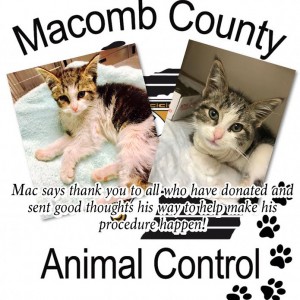