8/29/17 – A caring person learned of a dog being kept in an attic. The dog broke the window and was ‘barking’ for help. It was a very abusive situation and fortunately the dog went home with the rescuer. She was taken to an emergency hospital where the foot pad was found to be split and bleeding with a missing nail. Later it was learned that she was heart worm positive; that is when we were contacted. Poppy is one of the heart worm cases that we committed to and she has been on her 30 day pre-treatment and will be starting the injections soon. She is doing very well with the family but has not acclimated to the family dogs. Say a little prayer that this sweet animal will have peace and love. ~ diana 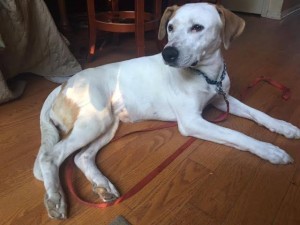