8/28/17 – Meet Zena (aka Captain America). The rescuer was contacted about a cat roaming the area who was missing part of ‘his’ leg. All the rescuer had to do was to put out a trap and ‘he’ just walked into it. (It’s hard not to have a piece of your heart break off each time I’m contacted about these many animals and think about the many who are never rescued.) But, the good news is that Captain America (actually Zena) is one of the few rescued and was named such because of how amazing he was to have survived the street with half of his leg missing. As you may have guessed, Captain America turned out to be a Captainess America and was renamed Zena. She had her leg amputated and is now in a loving foster home. If you are interested in this very sweet girl whose medical has been taken care of by 4 Paws 1 Heart, please contact Jeanine at: jkc4msu@yahoo.com . ~ diana 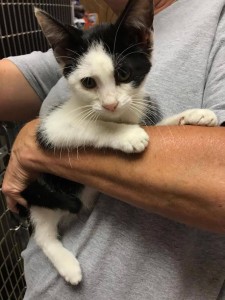