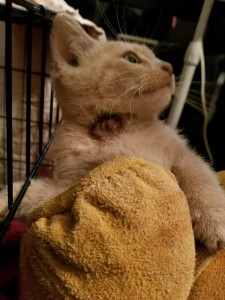 was found in a cat community at just two months old. He had a open wound across his neck about the size of a fifty cent piece. With the help of 4 Paws 1 Heart, Chance was taken to a veterinary hospital where he was treated for the wound and a severe flea infestation. At the same time, what appeared to be a littermate, was also rescued and vetted. Leo and Chance are now in their forever home and here is the happy update from the rescuer, Elissa.
“Hello,
I just wanted to give you guys an update on Chance & Leo. They have been rehomed together to a wonderful family in the Riverview area. The family had recently lost their cat to kidney disease and the children were devastated. Chance & Leo immediately lifted the spirits in the home, and have since settled in very well. They were rehomed the week before Halloween, and I received an update just a few days ago that everything is going great and the family is very happy with the two of them. Thanks you guys again for all of the help with Chance’s surgery and their posting on PetFinder. This wouldn’t have been possible without you! Words can’t express how grateful I am, and I know Chance & Leo are too! Attached are a couple pictures of Chance & Leo in their new home.