11/20/17 – During this week of giving Thanks I would like to sincerely thank all of those who literally save the lives of animals who have been abandoned and abused. Very often they put their own lives on the line and if not their lives, their time, their money, their hearts. One such group is from Jackson, MI, Saved by Zade. I believe I reported on this very moving rescue when we were first contacted. A mom and 4 kittens, who had obviously been in someone’s home, had been found on the side of a river near a park and a fishing bridge. One kitten was covered in maggots and he eventually died, but not before the wonderful rescuers were able to bathe him and love him. He died in one of their arms. Another kitten, Helen, needed both eyes removed immediately and an amazing doctor at Snow Animal Health Care did this for free. Two other kittens needed eye removal; and we committed to helping with this surgery when the time came. They had their surgeries two weeks ago and are doing great.
As winter approaches, please say a little prayer each night for all of these animals who have either been born in the wild or who have been thrown out by their owners. And, please, do whatever you can to be a part of the solution – rescue, donate, foster, adopt. Thanks, diana 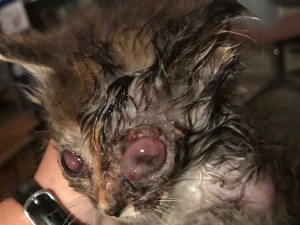 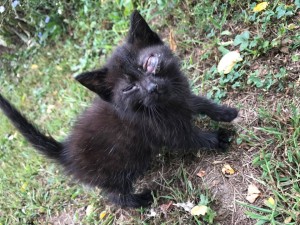