1/12/18 – This is Baby. Someone called Erica (an independent rescuer we have worked with in the past) weeks ago about a stray purple poodle running 7 mile in Detroit. Erica picked her up, and got her cleaned up. Baby appeared rather healthy and cared for. Due to the purple paws, she felt that she had a home somewhere. Erica tried really hard to find her owners but no one was found. She was loved at one point before becoming displaced. Recently she began wobbling/shaking a bit and she appeared to have a skin issue. Erica is committed to this girl as far as fostering her. She is approximately 6 years old. 4 Paws 1 Heart has committed to helping Baby and she was recently treated at the vet and spayed. We are hoping that an imbalance in her glucose levels may have caused the wobbling. Anyone interested in Baby should contact Erica at: ericadiola@gmail.com ~ diana 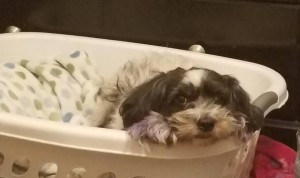