1/13/18 – An oldie by a goodie. Our boy, Soup. It was four years ago when Soup was brought into the emergency where Gina worked. He spent 12 weeks in a crate (with Chance’s mom) while he recovered from a broken Pelvis. Then, he spent almost a year with Gina DeLuca while she tried to find the purrfect family. And, as Gina does so often, she did find that purrfect family MaryBeth Walsh Victor. Can you just imagine the horror of having your pelvis broken, your head stuck in a can, and lying helpless in the cold? ~ diana

“Remember Soup? He was found with his head stuck in a soup can? The shaved area on his hind end was because another animal crushed his pelvis. Unable to defend himself, he cried and crawled until someone heard him and contacted us for help. I took him home to recover from his shattered pelvis (12 weeks to officially heal), and this December made one year fostering him. Longest foster ever in my home. I’m very happy to report that Soup will be going to his forever home this Friday. I will miss him dearly, but this family is wonderful for him! They are perfect, he is perfect, and he will get the love and attention he deserves. We are so blessed to have given him a 2nd chance especially after being found on the street unable to walk.. Gina, 2015 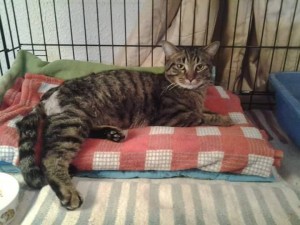 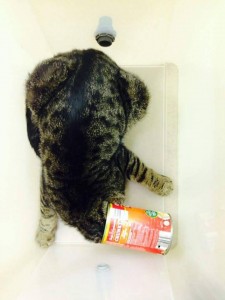