12/28/17 – Although this was 5 years ago, I thought the story was again worthy of sharing during this Christmas season. ~ diana

“12/25/16 Christmas Story #2 – It was December 3, 2012 when we received a call about a dog standing on a rock in Lake St. Clair, the cold waves lapping over her.Because no authority could help, Tony climbed down the sea wall and rescued this wet and frozen little girl. My neighbor and I immediately took her to a nearby veterinary where 4 Paws 1 Heart covered her medical. Her body temperature was very low but fortunately, she had a microchip, and no other injuries. The owner was eventually contacted and we learned that Cookie had been missing for 5 days. We have no idea how this little dog got into the water in that the sea walls are quite high where she was found. Cookie was back with her mom by late that night.
Now — There was a Christmas twist to this tale. It turned out that Cookie’s owner actually lives next door to the house my grandparents lived before they died and she had been a tremendous help to my family in offering rides to the doctor and the grocery store. She always kept an eye on them. When I found out who Cookie’s owner was, I was convinced that my grandfather played a role in Cookie’s rescue. The next day we were having lunch at the Butter Run, St. Clair Shores. When my drink was brought to the table, it was in a vintage glass just like the ones my grandfather had given to me before he died. I think Grandpa was saying “Thank You” for saving Cookie for her mom, Alberta. Merry Christmas. ~ diana” 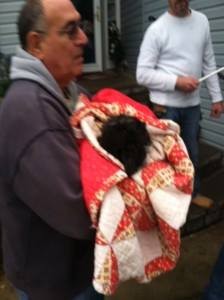 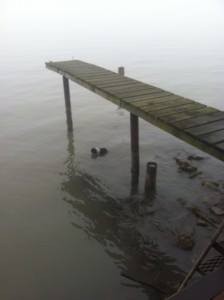 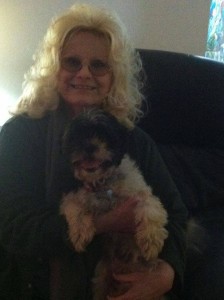