12/30/17 – As we get close to the end of 2017, I want to remind everyone who wants to make a year-end donation to a worthy charitable organization, please consider 4 Paw 1 Heart. 99% of the dollars donated go directly to veterinarians for medical care of abandoned, stray, and abused animals. Jolly was a recent case. This was our first contact regarding Jolly: ~ diana 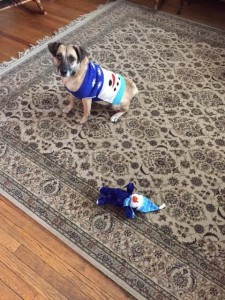 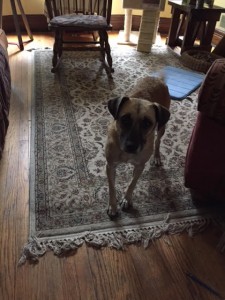 “Good morning Diana:
Thank you so much for talking to me just now. I’ve attached some photos of Jolly and my daughter, Samantha.
Jolly, second name is the Alley dog because the neighbors here in Southwest Detroit found Jolly in the alley since it was her territory. Another neighbor, owned Jolly but never really took care of her. She would roam the alley so she was such a fantastic jumper of fences. The neighbor never gave her any vaccinations. Three of the neighbors on my block volunteered to pay for her spay and finally after convincing Jolly’s owner she agreed. We tried to have her spayed in June but she was already pregnant. In July she had nine puppies from a male pitbull who also was in the backyard.
The neighbor finally agreed and on Monday she was spayed at All About Animals. All About Animals said that she had heart worm and a skin infection. I’m giving Jolly medicine for the skin infection. I want to know if I should also put on the flea medicine or maybe that’s too much for her during this time of recovery and even having heart worm.
Jolly is recovering well and is a happy dog. I currently have her at my house and have put in on her on a regular diet. It’s been a big change for her since she’s been used to being outside all the time and used to eating scraps that other neighbors fit her along the alley.
I very much appreciate any help you can give us and look forward to supporting you in your efforts to have healthy happy dogs. – Janet”

UPDATE: A surrender form was signed by the owner, Jolly will start heart worm treatment this week because heart worm medication has been back ordered for months. Janet went on to find a loving family for Jolly. She has also helped to find homes for Jolly’s puppies. This is Jolly’s first Christmas photo and the other photo is from when Jolly was first surrendered and rescued. Prayers that Jolly will soon be heart worm free. – diana