12/18/17 – Another Happy Beginning made possible because of our financial supporters and those who don’t turn their backs on an animal in need. Remember that donations (up to $2,000) made between now and Christmas Day will be matched by a generous supporter. Donations can be made by using the link on the left side of this page or by mail at P.O. Box 84, St. Clair Shores, MI 48080. ~ diana

“I wanted to share this handsome boys story!! Tino walked into the feral colony I care for one night, it was very clear that he was not an outside cat and wanted nothing to do with being outdoors!! His eyes were very irritated and running I thought from maybe an upper respiratory infection! I was able to house him overnight and I contacted 4Paws1Heart about having him looked at! I knew I had a home for him if we could get his needs taken care of! They gave me the go ahead to have him seen, turns out he was already nuetered and he had something call entropion of his eyes, the bottom of his eyes were turned in and his lashes we’re rubbing against his corneas!! Left untreated he would probably lose his sight, not to mention how painful it was!! The vet contacted 4Paws and they agreed to pay for his surgery!! Valentino is such a loving, beautiful cat and if not for all that 4Paws1Heart does, and all of the donations that come in I can’t imagine how this story would have turned out!! Thank you Thank you!! Love Tino 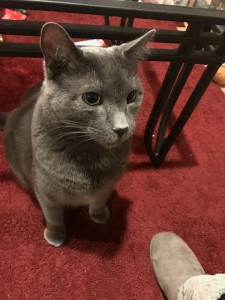