3/29/18 – Jack Frost (aka Blizzard) is looking for his forever home. He was found 3 days before Christmas, starving to death in a garage, unable to access food or water. Gina has been fostering and socializing him since.
Jack would do best in a home with one or two adults who have had cats in the past and at least one other cat whom he could play with. He loves to interact with Gina’s 16 year old cat but she only tolerates him; she doesn’t want to romp around like he does. Jack is still shy when it comes to being picked up but once he’s in your arms he loves attention. He drools, purrs, and hugs you. He so happy. He is approximately 8 months old. He is up-to-date on vaccines and has tested negative for feline leukemia and FIV. He does not seem affected by Gina’s dog, however, her dog is cat friendly. If there is another dog in the home, it would be fine as long as the dog is 100% safe around cats. Jack is neutered and ready for his new home! He also loves to play with the feather toy. Please share! ~ diana 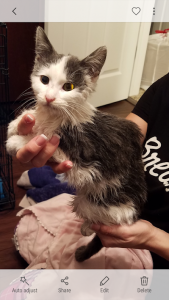 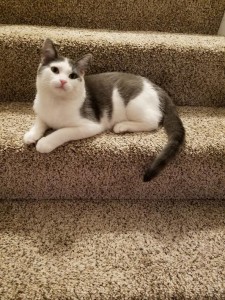 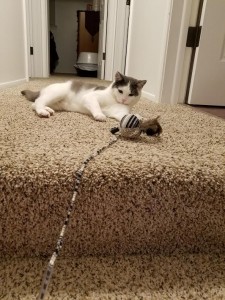