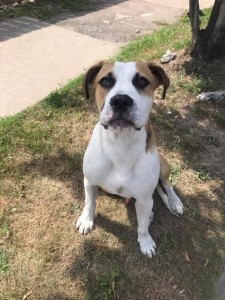 8/2/18 – The other day (after I just wrote over $10,000 in checks to veterinaries) I received the following message:
“My girlfriend and I sometimes go down to Detroit and look for homeless dogs. Sometimes we just offer food and water, and other times we take them in and adopt them out to good families. Hanson is our 7th Detroit rescue. We went down to Detroit to look at the area we got our 6th rescue from (who we ended up keeping) and within 5 minutes, saw Hanson looking for food. He was a super friendly, but nervous boy. He took to my girlfriend right away as she fed him chicken nuggets and gave him water. I knocked on a few doors on the block and asked if Hanson belonged to anyone. All the neighbors said no, and then a man came out of the house on the corner and said “Do you want that dog?” to my girlfriend. She asked if it was his dog, and he said no, he saw him get dumped on the corner about 8 or 9 days ago, and he’d be hanging out ever since, obviously not knowing where to go, and hoping someone would come for him. When the man told us that he had been dumped, we knew we had to take him. We have 4 dogs at home, so we knew we couldn’t keep him, but there was no way we were going to leave this 8 month old puppy on Springwells, knowing no one was coming back for him. He is so amazing, loving, all around fantastic dog and we have no idea why he was dumped, other than people are just cruel. “

We, of course, agreed to pay for Hanson’s basic medical needs but we can’t continue without your help. Anyone interested in Hanson should contact Vincent at: vincentpopovski@gmail.comThanks ~ diana